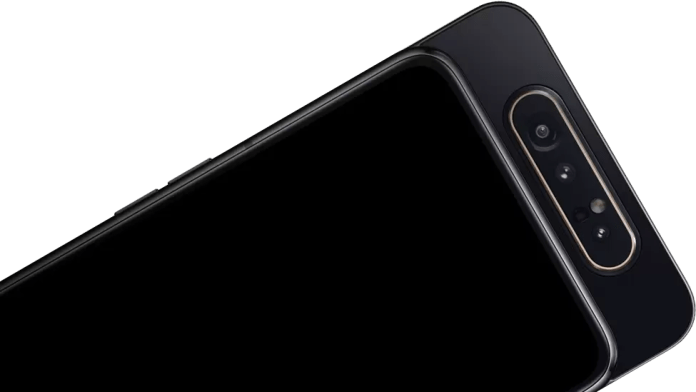 Smartphone companies have jumped over every camera mechanism they can think of. Be it pop-up cameras, hole-punched ones, sliding screens, fancy notch designs, or anything of the like, they have come up with awesome (and some not-so-awesome) designs for them all. Samsung isn’t one to sit behind watching, either. For the latest release in its highly successful A-series, Samsung has decided to go with a new and flashier approach…

The Samsung Galaxy A80 is Samsung’s latest gizmo on the A-series lineup. Succeeding other successful models like the A10, A20, A30, A40, A50, and A70, this device definitely has top-of-the-line features that make it suitable to be placed on the high-end spectrum of this prized series of phones.

This smart gizmo has a lot of great features. However, the motorized camera is definitely one of the features that stands out the most. This isn’t an entirely new concept altogether but the way the design has accommodated this mechanism is simply fabulous. This rotating camera module accommodates a triple camera design. The main snapper is a 48 MP primary camera with an f/2.0 aperture. Just below it sits an 8MP ultrawide lens with an f/2.2 aperture. Finally, we have a 3D depth sensor, which provides excellent background blur for the camera’s Live Focus mode. Since the camera flips, it’s the same design as the selfie cameras. This well-balanced setup makes sure that your selfies end up crispy, clear, and cute! However, features such as Live Focus and Super Slow Motion won’t be available when the camera is facing the front.

We know now that the camera setup is pretty excellent, but the screen doesn’t let people down either. With its signature Infinity Display, it sports a 6.7″ Super AMOLED screen with FullHD+. Gorilla Glass protection provides a certain degree of resistance to scratches and drops. With its almost full bezel-less display, this phone has a very sleek look to it. This is, of course, made possible by replacing Samsung’s hole-punch with the rotating camera setup. The body has an aluminum frame with glass covering the rear as well, which adds more elegance to its look.

The phone runs on Android v9.0 (Pie) with the company’s cool OneUI on top. The phone sports 8 solid RAM along with 128GB internal storage. On the processor side of things, we have the Qualcomm Snapdragon 730 (8nm) and Adreno 618 GPU. This, along with the Super AMOLED makes gaming a great experience on this phone. The phone also sports the cool under-display fingerprint sensor and face recognition.

But the cool transformer-Esque gizmo does come with its flaws. Due to the lack of accomodating space, Samsung has decided to go with a smaller 3700 mAh battery. However, the folks over at Samsung have promised that the 25-W and optimized battery performance will make up for this. There are is a headphone jack or microSD slot either, which is a bummer.

The phone has recently been launched at an event in Thailand and is priced at $730 which is around NRs 80, 730. However, it is yet to be launched in Nepal so we’re still in the dark about the exact price point.

What we do know is that this pricing is pretty close to the Galaxy S10e. So, you should surely do a bit of research before buying any phone at this price point. What do you think of this new rotating camera mechanism? Leave your thoughts in the comments section below!