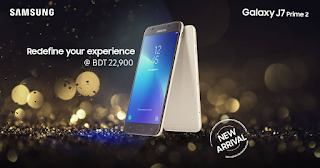 Samsung Nepal has officially launched Galaxy J7 Prime 2 in Nepalese market during Samsung Forum 2018. Galaxy J7 Prime 2 is the successor of last years J7 Prime and has minimal upgrades in specification whereas the design is similar. The phone comes with the price tag of Rs 28,990.
The phone comes with 5.5 inches of TFT display with a resolution of 1080 * 1920 pixel resolution and the screen is protected by Gorilla Glass 4. The phone comes with a metallic body design. Talking about the performance, the phone has the similar chipset like the last year’s J7 Prime i.e Exynos 7870 but the upgrades are seen in RAM and onboard memory which is 4GB and 64GB respectively compared to the last years 3GB RAM and 32GB onboard memory.

Another upgrade in the phone can be seen in the camera department. The phone comes with the 13MP camera in both the front and the rear. The rear camera comes with a f/1.9 aperture which means the camera will be able to absorb more light during the low light conditions and the camera will be able to take great photos during the low light conditions. The phone is also packed with LED flashlights on both rear and front. The fingerprint sensor is in the front and the phone is backed up by the 3300 mAh battery.
The phone runs on Android v7.1 (Nougat) out of the box and there are no extra features or sensors compared to the last years J7 Prime.