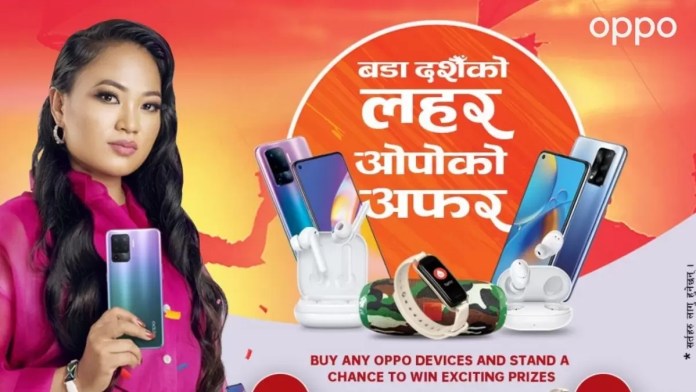 Dashain has its perks and never comes alone. Just when Dashain is around the corner every company from apparel to gadgets comes up with a Dashain campaign. Oppo Nepal has announced a special Oppo festive offer with gift promotion for Bada Dashain 2078 called “Bada Dashain Ko Lahar Oppo ko Offer”. Customers who purchase Oppo devices throughout the holiday season will be eligible to win a variety of beautiful prizes as part of the campaign. While the campaign officially began on September 12 and will run through October 18, 2021.

Each week they will choose the lucky winner via random lucky draw. The fortunate draw winner will receive an OPPO F19 Pro, OPPO F19, OPPO Band, W51, W11. There are other tempting Oppo gift hampers as well. However, the final lucky draw will happen on October 18th. The winners will be announced on Oppo’s official social media accounts.

Surprisingly, those who participate will be eligible to win the prize until the very final fortunate draw. Hence, those who were not picked as winners in the first week don’t have to worry. You would automatically be entered into the subsequent lucky draw.

On the occasion of the launch of this Dashain campaign, Mr. Pearson Shen, Brand Director of Oppo Nepal said “Being a global company, OPPO has always believed in localization. Nepal is one of the priority markets for us. Its richness in cultures, traditions, and simplicity in diversity has always inspired us. Hence, intending to celebrate the grandest festival of Nepal “The Bada Dashain”, we have introduced the “Bada Dashain Ko Lahar OPPO Ko Offer” campaign. This way we to share the happiness with our valuable fans here in Nepal.”

The history of Oppo smartphones is linked with camera-related innovations. Oppo’s smartphone costs and developments, on the other hand, are excellent. Tell us about your excitement for Oppo festive offer “Bada Dashain Ko Lahar Oppo ko Offer”. If you want to acquire a smartphone this Dashain, now is the time.